The Syrian Jewelry Industry: A History of Authenticity and Beauty 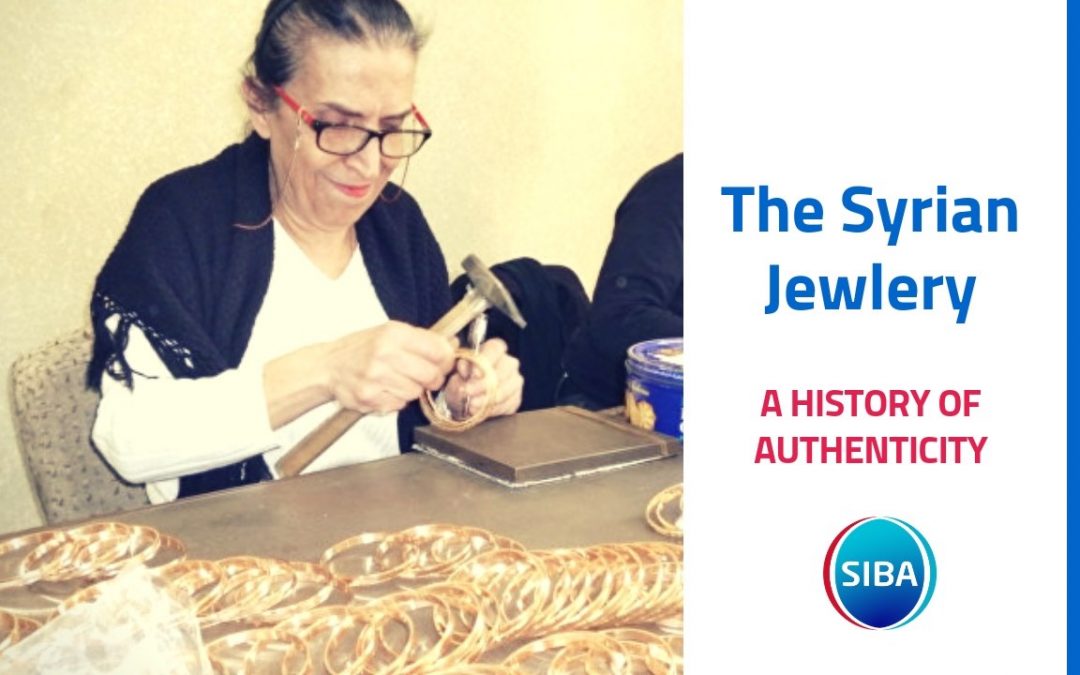 Anyone who visited the old city of Damascus must have visited Souq Al-Sagha, or the Jewelry Market the, located between Al-Buzuriyah Souq and the Umayyad Mosque.

Shops on both sides of the Jewelry Market are bustling with people, especially women before their weddings. Relatives of the bride and groom visit the market together to buy Al-Shabka, a piece of jewelry traditionally worn by the bride, continuing a longstanding tradition that no wedding is complete without.

In addition to buying the engagement and wedding rings and other wedding accessories, residents of Damascus and its surrounding visit the Jewelry Market for a variety of reasons, most importantly to preserve money for years to come, or purchasing a valued gift for a newborn baby or a graduating student.

If you move outside Damascus, you will find the same traditions, people purchase jewelry for the same reasons. This demand for golden jewelry and gold reflected positively on the industry and made it one of Syria’s most important industries. Although Syrians innovate in their designs, they are also able to preserve the identity of an industry that stretches back thousands of years in history.

In order to affirm the roots of  jewelry industry in Syria, we have to visit the National Museum. Walking though its hallways, we can see the gold crafts that date back 5000 years. These crafts were handmade and yet it preserved its beauty and luster across the ages. Furthermore, these pieces of jewelry served as a source of inspiration to jewelry craftsmen for years. These goldsmiths have inherited the tradition and craft from their parents and ancestors and were inspired by the older designs of jewelry, but they also added their own touch that suit our modern times. Thus you can see designs that both resemble the old spirit but also carry a modern touch.

The National Museum is also full with a variety of gold crafts which were discovered in Ebla, Palmyra and Ugarit, indicating how ancient this industry and tradition run not only in Damascus but across the country.

However, we can also find plenty of goldsmiths who have chosen their own path and distanced themselves from the past, creating designs from their own imagination with infinite attention to detail and precision. Due to the fame of the goldsmiths of Damascus, Aleppo and other provinces, Syria has attracted a number of international companies to hold gold and jewelry expos with significant Syrian representation.

The Gold Jewelry Industry in Syria by the Numbers

We cannot rely on accurate statistics but a report by a local newspaper spole of 15 thousand craftsmen working in Jewelry production in Syria, varying from a producer to a retailer. Additionally, there are approximately 5000 Syrian craftsmen working abroad between the Gulf countries and Egypt.

The report added that there are over 5000 gold shops in Syria, out of which 2600 are in Damascus alone. The president of the Goldsmiths Association in Damascus estimates the quantity of gold sold by approximately 200 kilograms a day, with the reserve reaching over 30 tons.

Diamonds are a different story from that of gold. The Syrian society is dominated by the middle class. As we mentioned, this class bought gold for the sake of adornment, but only 10 percent of buyers did that, while the remaining 90 percent bought gold for saving.

In the case of diamonds, the situation is different, and the ratios are flipped. The vast majority of the Syrian population viewed diamonds as adornment rather than long-term investment. Thus, the market for diamonds was dominated by the upper class. To affirm that we only need look at the prices which according to The Economist, in early 2011 started at 200 thousand Syrian pounds and could reach millions. These prices alone were enough for most Syrians to abandon diamonds in favor of gold.

The Economist also mentions that despite that, the diamond market witnessed gradual growth and increasing interest. The “Be a Pearl Gallery,” which was hosted in Damascus in June of 2011, featuring 36 artists from a variety of countries, was the largest example of such growth and interest.

The diamond market in Syria had suffered from low demand and a few legal issues. Yet, despite that it had started to grow and recover. Unfortunately, information and data on the current situation of the market is unavailable, but it sure was affected with the current situation.

Although the price of gold was more acceptable than the price of diamonds by the Syrian buyer, it did not suit all sectors of the society. Therefore, the traditional jewelry industry or what was called the Russian gold found its way into the market and even flourished over several decades. The main reason is to meet the needs of women who did not have the ability to buy gold jewelry.

The price of Russian gold in 2010 prices started from 400 Syrian pounds, and reached in some shops 1500 Syrian pounds. These prices allowed many women to buy a good number of traditional jewelry, which would not be possible with gold.

It is estimated that more than 100 workshops existed in Damascus in 2010, and have long competed with the real gold market.

Swiss watches are the most famous of its kind. It is because of its durability and elegance. The watchmaking and manufacturing of these watches was equivalent to the jewelry industry and sometimes surpassed it in terms of importance. The most important of these is Mr. Hakup Kazanjian, owner of the prestigious Kazanjian Watches.

The history of this company began with the migration of a large number of survivors of the Armenian genocide to the Middle East, especially to Syria, leading to the establishment of a large Armenian community there. In the middle of the 20th century, the daughter of a survivor named Aida had a passion for Swiss watches, and she saw a great future and opportunity. She dreamed of marrying a young watchmaker who shared her passion. The young woman later achieved her dream and married the watchmaker, Mr. Hakup Kazanjian, in 1975, who founded Kazanjian Watches in 1960 in the city of Aleppo in northern Syria.

The family has worked hard to expand its business and establish a network of retail outlets throughout Syria. The Kazanjian family has become one of the largest distributors of Swiss watch brands in Syria. The company did not limit itself to Syria, but became one of the most reputable family companies not only in Syria but in neighboring countries and gained fame throughout the Middle East.

Mr. Hakub Kazanjian and Ms. Aida Kazanjian passed on the profession for their children and daughters. Their younger son, Mr. Ravi, succeeded his father and desired to expand their business outside the Middle East and found his native homeland Armenia to be the perfect distination. Mr. Ravi moved to Armenia in 2009 and established a company branch in the heart of Yerevan, capital of Armenia.

In addition to the expansion to Armenia, the family is currently looking to establish a small plant in Switzerland. The eldest son of the family moved to Canada and the family’s daughter, Maral Kazanjian, moved to France to run the family business there.

The Kazanjian family is one of the best examples of struggling family businesses. At the same time, Kazanjian Watches history gives us a glimpse of the Swiss watch industry in Syria and often outperforms the same industry in many countries, but events in Syria have, of course, affected the family business and caused them to spread across the world.

The Kazangian family is not the only one affected by what happened after 2011, but the entire jewelry industry. So let’s see how this sector is affected in the next paragraph.

The Jewelry Industry After 2011

It is not surprising that the industry, like others, is heavily influenced by what is happening in Syria. Much of the goldsmiths in general, and the Aleppans in particular have lost their profession. The gold market now centers in the capital, whose sales volume reaches 3 kg per day according to a report by Al-Akhbar newspaper. The report adds that the volume of sales shrinks to half that amount or less in Lattakia, which has around 150 gold shops, in addition to a few industrial workshops.

In wartime, people are less interested in form and design as much as people care about gold as value and an easy way to store money. Consequently, much of the goldsmiths no longer pay attention to the aesthetics and design. Demand for gold Liras (coins) and other forms of gold with a high resale value increased.

In conclusion, we would like to point out that the report may have focused more on the city of Damascus because the sources and articles talked more about it, but we welcome any addendum or information that can enrich the report and add to it, and if we are provided with sufficient information about another province, we will dedicate a special report to it.