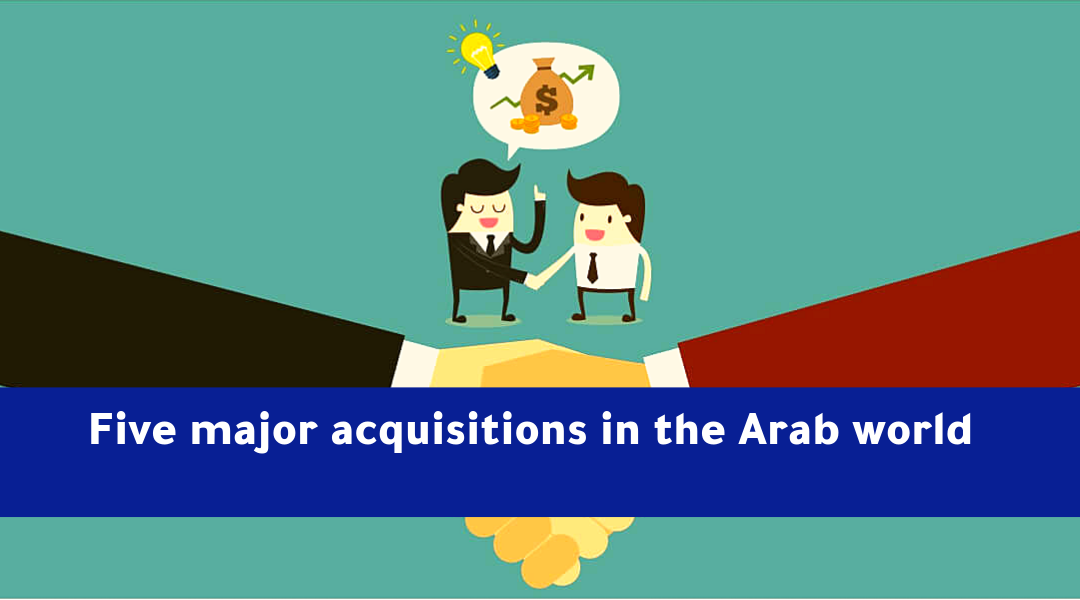 Today we will talk about the most important acquisitions of start-ups that have taken place in the Arab world and created a fuss in the media and specialized sites.

Acquisitions are closely related to the culture of startups, and almost every entrepreneur today has faced the choice to sell his startup to a larger company.

The Middle East and North Africa (MENA) region is not excluded from this equation, but so far these deals are not up to global standards. However, they are on the right track. We are seeing a significant increase in the number and value of these deals, which promises a better future in the region.

One of the most prominent events in 2017 in the world of ​​entrepreneurship and e-commerce in the region was the acquisition of Souq.com by the internationally recognized Amazon.

The acquisition was announced in March 2017, and the deal was estimated at $650 million, but nothing is certain and the deal may even be bigger. It is worth mentioning that Amazon faced competition from Emaar.

Souq.com was founded in 2005 in the United Arab Emirates by CEO Ronaldo Mouchawar and Marketing and Public Relations Manager Haitham Masood. Over the next few years, he managed a number of successful investment tours.

Souq.com has reached what no other company in the Arab region could in terms of success, with more than 40 million visitors per month, dominating more than 75% of the e-commerce market.

The story of Souq.com ended in the best way possible, whether you look at the company that acquired it, or at the value of the deal that broke all records until the acquisition of Careem came to break those records again. What is Karim’s story?

Careem, which was established in 2012 in the UAE, is a ride-sharing service in the Arab region as a major competitor to the prestigious company Uber.

Over the past five years, the company has expanded to 80 cities across 13 countries in the Middle East and North Africa.

In addition, the company has expanded in other countries such as Turkey and Pakistan, increasing pressure on Uber to seriously consider acquiring Careem, the company that started pulling the rug slowly.

Uber did not wait long as it announced the acquisition, which broke all records in the Arab region. It was a leap in the history of entrepreneurship. Uber and Careem reached an agreement of US $ 3.1 billion consisting of US $ 1.7 billion in loan bonds and $ 1.4 billion in cash. The transaction is expected to be completed during the first quarter of 2020.

Another success story of acquisitions in the Arab world is the acquisition of Kuwait’s Carriage, the leading company in food delivery in Kuwait and the rest of the Arab Gulf. The company was founded by CEO Abdullah Al-Mutawa and financial director Musab Jihad Al-Mutawa. Operations Manager Khalid Al Qabandi from Kuwait and Jonathan L. from the United States.

On May 29, 2017, the Delivery Hero Group for Online Food Demand and Delivery announced its acquisition of Carriage and both parties agreed not to disclose the value of the deal, but some sources estimated the deal at $200 million.

The carriage has adopted a hybrid system through which it found an opening in the market. The model is that it allows the ordering of food from hotel restaurants and all other restaurants, whether they provide delivery or not, as long as they deal with the company.

Maktoob.com was founded in 2000 by Samih Toukan and Hussam Khoury as the first Arabic site to offer free e-mail in both Arabic and English.

Maktoob had more than 16 million users and ranked 156 on the list of the world’s best Internet sites during its peak period, equaling 0.47% of the world’s Internet users. This made Yahoo look to Maktoob as an excellent opportunity to expand in the Arab world.

One of the oldest and most famous acquisitions in the Arab world. The deal was announced in 2009 after five months of negotiations.

Yahoo finally confirmed the deal, with a volume of about $85 million and other reports said the deal was worth $100 million.

The deal brought together 20 million Yahoo users from the Arab world with 16 million users from Maktoob, boosting Yahoo’s presence in the Arab world, which experts predicted could be a radical change in the industry. It is worth mentioning that Yahoo failed to capitalise on the deal, closing Maktoob soon after, and thus ending the most significant attempt to provide an email service in Arabic.

The acquisition of Nimchi has a special place on this list, as it is the only startup acquired by an Arab company, while the other companies on the list were acquired from outside the region.

The acquiring company was Emaar, which used the deal to enter the world of e-commerce. The deal came only two months after Amazon’s acquisition of Souq.com, and because Emaar failed to hijack the deal from Amazon, it went on to acquire Nimshi to stay in the game.

Namshi was founded in 2011, and has grown to become a recognised brand in the world of innovation and creativity. It has become a wider window for fashion lovers, especially youth, offering the latest trends in the world of fashion. It provides a huge variety of products and the finest brands, not to mention the ease and simplicity with which it provides these products..

These were the top five acquisitions in the Arab world, and these deals are of great importance as they have contributed to the establishment of an active entrepreneurial market in the region.

These stories and many others that the article cannot mention, promise a better future in the Arab region and the promotion of this culture, which will probably shape the future of the economy throughout the world.

Do you know other stories? Share it in comments.