Syrian Carpet … A long history, a difficult reality, and an unknown future 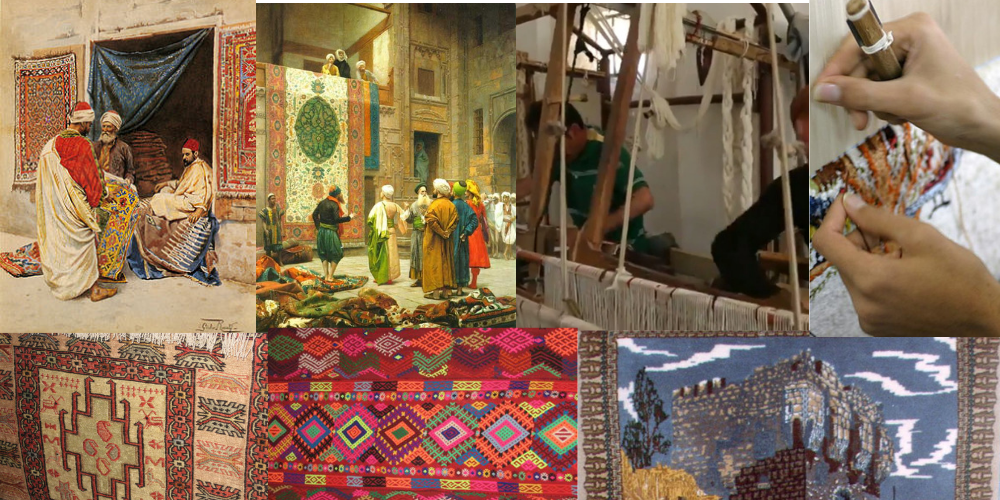 The Syrian Carpet industry is extremely old, as it began before history and continues to this day. Despite the great development in the industry, many manufacturers still respect the ancient traditional ways they inherited from their fathers.

Many consider carpets as pieces of art instead of pieces of furniture, which gives the industry another dimension. What is the history of this industry and what are the most important elements to which it relates, all this and more in the following article.

History of the carpet industry

The history of the carpet industry is very old. Perhaps the industry is one of the oldest industries known to man. It is believed that humans started weaving carpets since centuries BC. The first place for this handicraft industry was the Eurasian plains and Central Asia. The oldest carpet is believed to be a Pazyryk carpet that dates back to about 500 BC.

Palmyra was also famous for its multi-colored tapestry and geometric designs, and the inhabitants of Badia al-Sham still wear various types of daily-use textiles.

Some critics say that the Kixeru rug, which the Arabs acquired from Persians around 636 AD, is one of the oldest historically recorded carpets around the world.

The industry flourished later in the Ayyubid and Mamluk periods, and some private collections and museums still retain pieces of Mamluk carpets, especially in Italy. Mamluk carpets are also known as Damascene carpets for the contribution of the Damascus textile workers in its manufacturing.

The Ottomans, in turn, adopted this industry in the Levant, and it flourished because of the skilled workers and the patronage of their sultans. The weavers from Kerman, Damascus and Cairo began to flock to that country. After the First World War, the Armenians made carpets in Aleppo. The primary materials used were: wool, cotton and silk.

The industry remained strong and it was passed down from fathers to sons until the mid 20th century. In the mid-1960s, the Syrian government established so-called “social units for the teaching of the hand-made carpet industry”, mainly in the rural areas of the country, and small Syrian cities. At the end of the 20th century, there were more than more than one hundred guiding units.

Many people considered the carpets as paintings rather than pieces of furniture. This has historically been reflected in the form of carpets and patterns of carvings. Some of them painted carpets with a drawing of the Damascene rose, and others painted Syria’s archaeological and historical landmarks such as the ruins of Palmyra, the Tekkiye Sulaymaniyah Mosque, the Umayyad Mosque, Deir Sidnaya, Deir Simean and the Citadels of Aleppo and Damascus.

The manufactured carpets also carry pictures of the popular uniforms in the various Syrian provinces. The floor carpets turned into paintings to be hung on walls. This transformed it from a simple need to a high-quality expressive work like any other creative work.

The symbols that were included in the hand-made carpets varied between religious symbols and symbols related to nature, indicating that the carpets became an integral part of the Syrian heritage. No house, no matter how humble or poor it is, is without a carpet. Surprisingly, the forms of carpets were changing and varied according to the environment, which we discuss in the following paragraphs.

Read also: The Syrian Jewelry Industry: A History of Authenticity and Beauty

Environments Vary, and so do Carpets

The variance between the types of carpets was very large, with names, shapes, colors and even the fabric used.

On the level of names, there are Iranian carpets, which are based on the simplicity of drawings and heat of colors and use inscriptions that represent plants such as flowers. But the carpet is characterized by geometric inscriptions in the form of Rhombuses and hexagons using stark colors.

The carpets of the Turkmen drew consistent drawings and homogeneous colors and were distinguished by their softness and gloss. Finally, the Pegari carpets were famous for their cohesive texture, dark colors, and engravings with drawings and natural shapes.

The carpets themselves differ from one another with regard to the length of the fur, the type of embossing, the carpet frame and the final form. Wool, cotton or silk are often used as raw materials for the carpet industry, or a mixture of these materials.

In terms of colors, the differences are also clear with the passage of time, where the Indigo dye derived from the true indigo plant to give the color blue. While saffron, vine leaves, almonds are used to give the yellow color and the roots of the common madder plant to produce the red color. Most recently, the majority have gone to the use of dyes and compounds manufactured from chemicals.

The Mamluk/Damascene carpets are characterized by scarlet red, golden yellow, navy blue and geometric patterns surrounded by straight branches or geometric shapes, while rectangular frames with astral shapes appear in the base frame. In Damascus, the carpets were usually red, but in coastal areas, its color was derived from the sea and most of it came in blue.

The inhabitants of Badia al-Sham cultivate different types of textiles of daily use, some of which are limited to black and white, and are also randomly planned, as well as colorful rugs and garlands with geometric shapes. The provinces of Homs, Hama, Aleppo, and Lattakia are also known for their rugs and carpets, which are predominantly rectangular in shape and blue, red and purple in color.

The carpet industry in figures

The industry suffered from many fluctuations, rising and falling in terms of people’s attention, government and popular support. Therefore, the industry cannot be framed with certain figures, but we will mention the figures for the carpet industry in 2010 as a point of reference to the reality of the industry in that period.

In 2010, cheap carpets started from 400 Syrian pounds, ending in 2000 Syrian pounds apiece, depending on the size and the effort to complete them. Two meters by one rug took two days of continuous work.

At the beginning of 2010, a public company called the General Company for the manufacture of wool and carpets in Hama was established. By the end of September 2010, the company had produced about 440 tons of woolen yarn and about 193 thousand square meters of carpets. Its sales amounted to about 150 thousand Syrian pounds of cotton threads and 130 thousand Pounds of carpet. The sales of carpet companies and guiding units in Hama amounted to 679 tons, with a value of 222 million Syrian pounds and stock of 111 tons valued at 33 million Syrian pounds.

On the industrial level, the medium-sized carpet, whether wool, cotton or silk, consumes about 10-25 kilograms of wool and cotton depending on its size, and ranges between 18,000 and 60,000 Syrian pounds.

Difficulties faced by the carpet industry

Historically, the carpet industry has suffered from many difficulties and constraints that almost caused the extinction of the traditional hand-made carpets in Syria, with the exception of a few people working in it. From these challenges, we mention a few.

The sharp competition between hand-made carpets and cheap industrial carpets, where the majority of people go to buy mechanically manufactured carpets due to its relatively cheaper price and the diversity it offers.

In addition, some of the difficulties faced by the mechanical industry can be attributed to the manufacturing machines being old, poor colors and poor planning, in addition to the difficulties of not being able to market products, and consequently their inability to discharge the entire production, leading to its damage in storage.

However, all these difficulties can not be compared to what happened after 2010. The following years were a real disaster that once again led to the near extinction of the industry. But what prevented it was the adherence of some craftsmen to their professions that they inherited from their fathers, such as this Edlibi craftsman from the city of Ariha who is personally trying to save what can be saved. He is an example among many from different Syrian governorates today.

The future of the Syrian Carpet industry

This industry has always experienced stages of prosperity and decline like other trades, but it is now at the minimum and in danger of extinction.

But the future, however, remains unknown and fraught with many factors that cannot be easily controlled. We hope that this industry will survive because it represents a long history and a profession that is more of an art.

A collection of pictures that tell us more about the Syrian carpet industry: