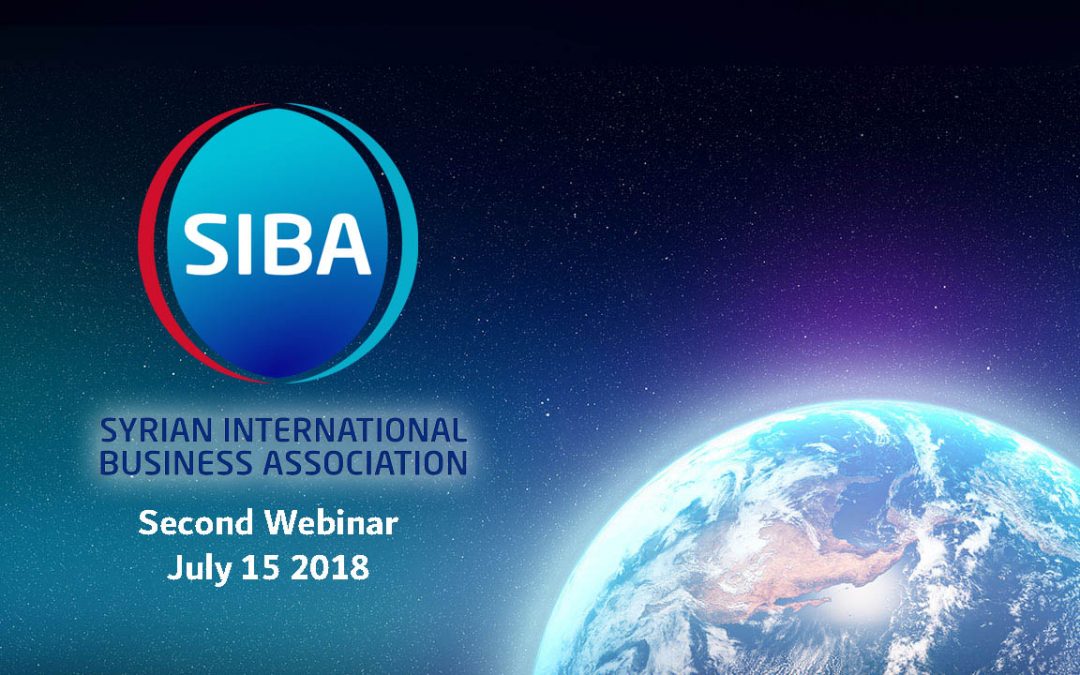 The Syrian International Business Association (SIBA) held its second webinar on Saturday the 21st of July, 2018. This webinar discussed SIBA’s bylaws and key achievements in the first year of operation. During the webinar, a light was shone on SIBA’s proposed plans for the next stages of its development.

The webinar was presided by Mr. Mohammad Al Chaer – A Board member – discussed SIBA’s structure and its proposed mechanism for establishing chapters in other cities. Mr. Chaer mentioned that plans to start new chapters in several locations are underway after the Board had approved a petition from at least 10 residents in those cities. Usually, those procedures start with choosing a Founding Board recognized by the Board of Directors. The chapter founding board would finalise the preparation and licensing activities in the proposed city/country of operation. After six months, a dedicated Board of Directors is elected to run the day-to-day business affairs for chapters, convene meetings and organise activities.

Mr. Al Chaer also reiterated some of SIBA’s priorities and its unswerving principles like enabling Syrian women: ‘Women will have a significant representation in SIBA’s Boards of Directors and its branches worldwide. Support will also be provided to Syrian women with entrepreneurial spirit in host cities.’

Both Mr. Tammam Al-Baroudi and Mahmoud Adel Badhenjani, members of SIBA’s Founding Board in Turkey, presented the progress in the Turkey chapter. Mr. Al-Baroudi said: ‘our chapter in Turkey will play an integral role within SIBA, who will in turn be strongly present amongst Syrian contingencies resident in Turkey, and entrepreneurs alike.’

Mr. Mahmoud Badhenjki shed a light on his initial perceptions of how SIBA’s Turkish chapter should operate, and their plans to attract more Syrian entrepreneurs residing in Turkey since they make up the largest Syrian business community worldwide, and their successful projects are on constant rise.

Ms. Rama Chakaki, member of the Board, talked about the progress that is being made in their US chapter stating that record achievements will be made within this framework of SIBA’s endeavours:

During his speech, Mr. Samer Chamsi Pasha gave a presentation delineating a list of the stated objectives for the Syrian International Business Association (SIBA) to be achieved in 2018. Those include the opening of 6 new branches in fresh new locations based in various host cities while fostering bridges of communications with sponsoring bodies, and enhancing the level of services offered by SIBA.

At the conclusion of the meeting, the Board Director, Mr. Mohammad Al Chaer forecast that SIBA will become an influential force amongst Syrians worldwide and entrepreneurs in particular. Furthermore, he anticipated such a powerful presence to become more evident within the next 3-5 years.