The Merchant of Syria: Syria from Abu Shaker’s Eyes 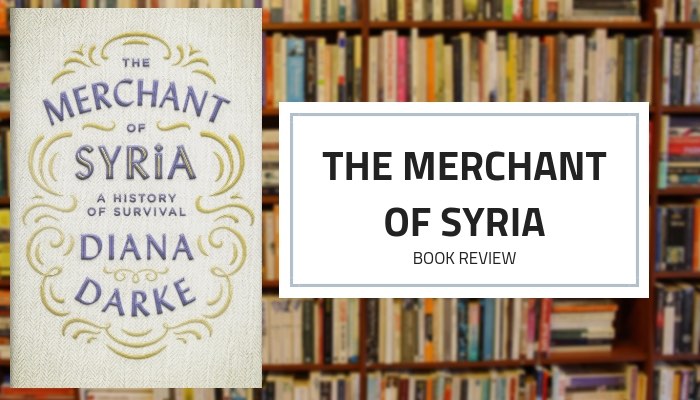 Trade has always had an important role in the Arab region, and it remains one of the main things that distinguish the region’s society. Syria is by no means an exception to this. Perhaps that is why Diana Darke framed the history of Syria with the help of a Syrian merchant from Homs in her book The Merchant of Syria: A History of Survival.

In The Merchant of Syria, Diana used the real story of Abu Shaker, a textile merchant who started his professional life in Syria before expanding to Lebanon and the United Kingdom later, as an entry point to discussing Syria and its development as a state.

Abu Shaker, the protagonist, was born in 1921, when the Ottoman Empire was falling apart and is preparing to leave Syria, and passed away in 2013 during the Syrian Civil War having left his home city, Homs.

Abu Shaker barely learnt how to read and write. However, that did not stop him from supporting his mother and siblings since he was ten years old. He was later able to build his trade empire despite losing everything he had twice. Diana Darke traces his troubled journey from instability in Syria and the Lebanese Civil War until he reached the United Kingdom in the 70s.

Darke moves between the highlights of Abu Shaker’s life, speaking of his marriages and his professional life which he started in the textile industry, and other defining moments that led him to successfully expanding the Hield Brother trademark in the U.K.

The book focuses on Abu Shaker’s life. However, there is another story being told between the lines. It is the story of a nation built on trade. Over thousands of years, Syria witnessed various conflicts and instability. Yet, like Abu Shaker, this nation continues to strive.

The Merchant of Syria might seem to tell the story of Abu Shaker, but in reality, it tells the story of Syria from the dawn of time until today, and how power was transferred from the Ottomans to the French until the Baath Party, with a special focus on trade because as we have mentioned before, it occupies a special and important place in the history of this nation.

Darke relied on interviews with Abu Shaker’s children and his acquaintances, which were conducted in Syria, Lebanon and the U.K. She was able through these interviews to sew the strings of Abu Shaker’s story which tackles various international issues such as poverty, Islamic values, religious coexistence, refugees, displacement, multiculturalism, terrorism and political instability.

It is worth mentioning that Diana Darke is an Arabic translator and cultural specialist who lived and worked in the Middle East for over 30 years. She is also the author of My House in Damascus: An Inside View of the Syrian Revolution (Haus, 2016). Her connections to Syria are deep and ongoing.

The Merchant of Syria Book Review

‘Enormously rich and powerful, beautifully written and from the heart.’
David Nott, humanitarian and volunteer surgeon in Syrian conflict zones

‘Darke’s empathy, deep knowledge of Arabic, and capacity to weave effortlessly along a complex path make her uniquely qualified to take us through Syria’s history, leaving us with many insights into a society constantly able to find inner strength after disasters.’
Ross Burns, former Australian Ambassador to Syria and Lebanon

‘By stitching together the fabric of Syria’s history through the life and experiences of a merchant from Homs, Diana Darke paints a textured narrative of a richly complex country, society and people. A book filled with passionate understanding.’
Chris Doyle, Director of The Council for Arab-British Understanding

‘By stitching together the fabric of Syria’s history through the life and experiences of a merchant from Homs, Diana Darke paints a textured narrative of a richly complex country, society and people. A book filled with passionate understanding.’
Chris Doyle, Director of The Council for Arab-British Understanding

‘The story of a single man can shine a powerful light on the tragedies of history. Darke sensitively deciphers these tragedies in a book that illuminates Abu Chaker’s zeitgeist and enhances our understanding of Syria’s past, present and future.’
Ece Temelkuran, Turkish writer, author of ‘Turkey: The Insane and the Melancholy’

Have you read this book? Share your opinion of it! Not yet? You can purchase it on Amazon in print or electronically